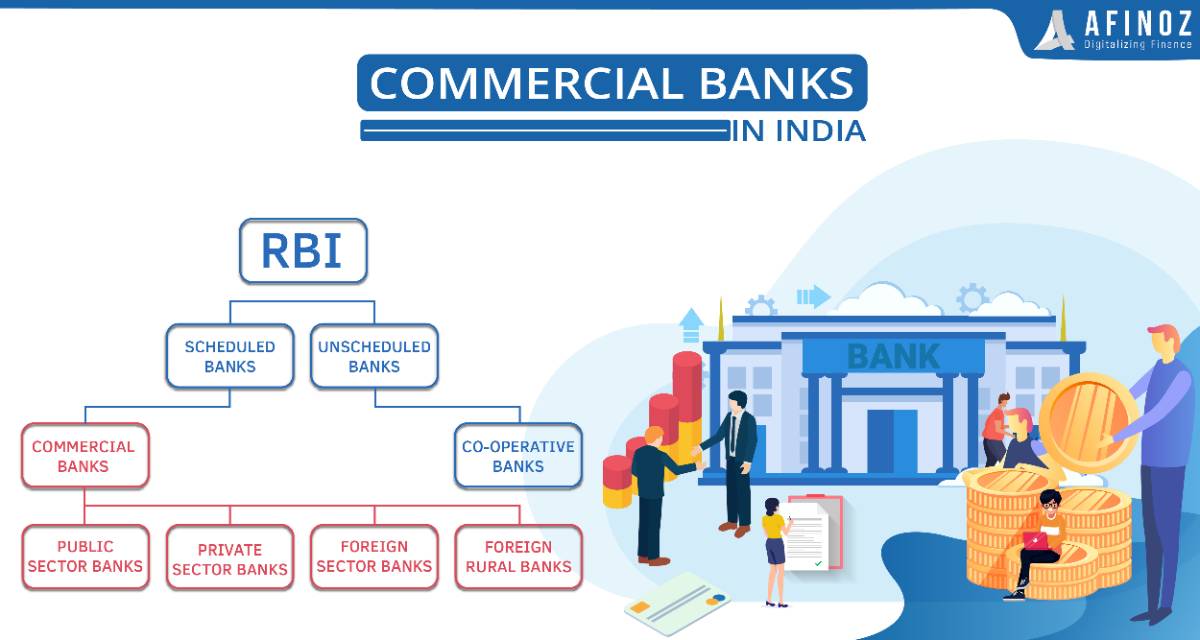 In the age of commercialization, choose the bank according to your needs –

Banks are the heart-beat of a nation’s economy and provide an overview of how the country’s economic growth and financial activities will perform. All major banks are considered commercial according to the basic structure as provided in the Reserve Bank of India Act 1934. However, there are other categories in banking like Small Finance bank, Payments bank and Co-operative bank under the scheduled bank category. Commercial banks can further be categorized into Public Sector banks, Private sector banks, Foreign Banks, and Regional Rural Banks.

Commercial banks are regulated under the Banking Regulation Act 1949 and enable a bank to carry out business operations of keeping money as deposits and grant loans to the public, corporates and the government itself.

Commercial banks in India are the backbone of all major economic activities in the country, whether it is for the citizens to keep their hard-earned money safely or get loans whenever they need funds for important things like a home, wedding, a car or for business. It won’t be an analogy to say that banks and businesses run hand in hand, as without adequate credit support, businesses find it hard to flourish, and vice versa.

Scheduled banks are those banks which are listed in the second schedule of the RBI Act 1934. These banks are licensed after they fulfil certain statutory conditions such as a paid-up capital of minimum ₹ 50 Lakh and must satisfy the CRAR norms as prescribed by the RBI.

Now, if we talk about the major categories that fall under the commercial bank, here are a few details regarding the same;

These banks are the nationalized banks undertaken by the Government of India in a way or the other. Many people can relate to these as state-run banks. Nationalized banks account for over 75% of the overall business transactions that happen in the country. Out of all these public sector banks, we all know the State Bank of India, which is now amongst the top 50 banks in the world.

As per the recent reports, after the amalgamation of smaller banks with larger banks, there are 12 public sector banks in India as of now. The names of these banks are:

Private sector banks are the ones that work on similar lines as the nationalized banks do, the only difference is that the majority stakes in these banks are privately owned, as in the major stakes in the equity are owned by private stakeholders or business houses. These banks majorly work on the lines of profit-making by keeping deposits providing loans and other products related to financial activities.

The major private sector banks in the country are:

A foreign bank is a bank having its head-quarter outside the country but run its offices as a private entity at any other location outside the country. The bank may have as many branches and offices they find suitable, they are under an obligation to operate under the regulations provided by the central bank of the country as well as the rule prescribed by the parent organization located outside India.

Some major foreign bank that operates in India are as given below:

These banks also fall under the category of scheduled commercial banks of small scale, the main objective behind the formation of such banks is to provide credit support to economically weaker sections of the society like labourers, farmers, rural traders and small business owners. Most of these banks are regional as the name suggests, means these banks operate in particular regions and might have branches in the metropolitans as well.

These rural banks work on specific lines and serve major functions like providing financial credit support to rural and semi-urban areas, provide support for government schemes by processing payments for the national pension scheme and MGNREGA beneficiaries. These banks are considered no less as compared to the nationalized banks, as they also provide card and locker facilities to their customers.

Payment bank is a relatively Indian new model of banks. Conceptualised and regulated by the Reserve Bank of India (RBI), payments banks can accept a restricted deposit up to Rs. 1 lakh per customer.  Payments Banks can offer services like debit/credit cards, net-banking and mobile-banking services.

The secondary functions of commercial banks can be described as the following:

Commercial banks do play an important role in fulfilling the short-term and mid-term credit requirements in an economy. However, they do not provide long-term credit for over 15 years or more, so that liquidity of assets can easily be maintained. The funds parked at the commercial banks belong to the general public and are withdrawn at a short notice; therefore, commercial banks prefer to provide credit for a short period of time backed by tangible and easily marketable securities.

In order to look for a loan through any of the commercial banks, kindly read Bank in India to look for while going for a Business Loan in India