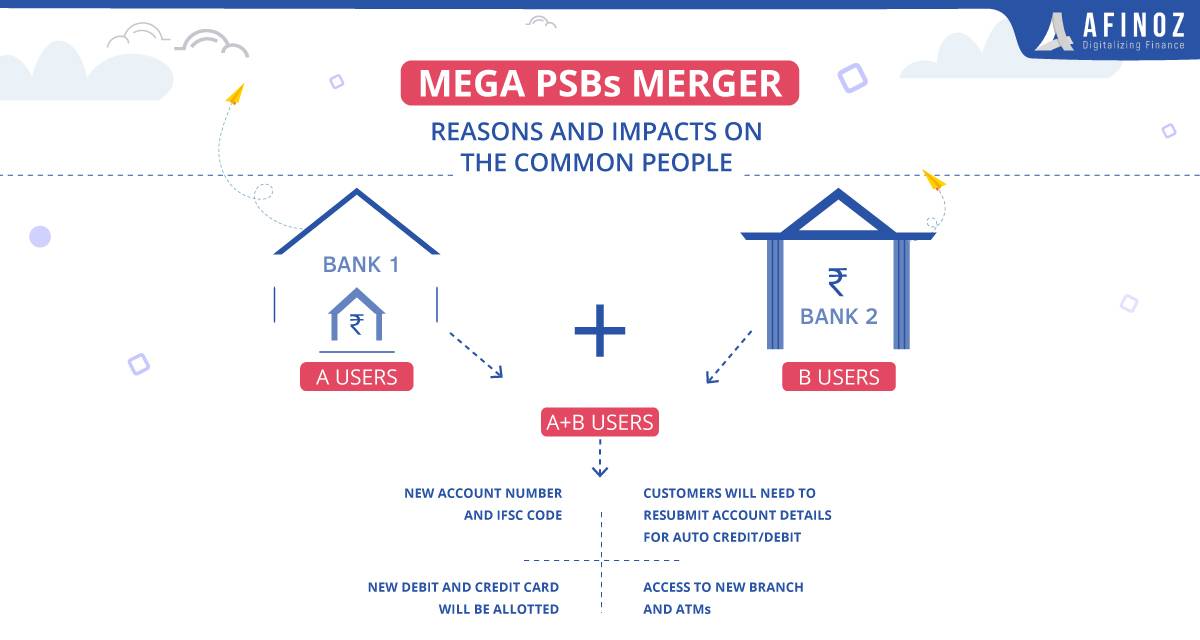 Mega PSBs Merger: Reasons and Impacts on The Common Man

Last year the government had announced the merger of ten Public Sector Banks which is scheduled to take place on April 1, 2020. Some experts were assuming that amid the COVID-19 crisis, the government may postpone it. However, putting to rest all the speculations, the RBI on March 28, 2020, in a press release announced that the amalgamation will be effective from the scheduled date. According to the new consolidation, ten state-run Public Sector Banks (PSBs) will be merged into four. However, this won’t affect the consumers that much still as a vigilant customer you should know if there is any reason to worry about it.

But before we proceed further, please have a look at how this merger will look like.

These ten PSBs will act as four banks and after this amalgamation, the customer of the smaller banks will see some structural changes. However, before you assess the impact of this merger, you must know why the government is making these decisions.

Reasons for The Merger

Almost every Public Sector Bank is facing the challenges of increasing NPAs. The increasing amount of bad loans or NPAs risks a bank’s credibility and hence the business. However, bigger banks somehow can manage it yet it’s a major challenge for the smaller banks. If a small bank continuously accumulates NPAs, it loses the business and later on customers trust. In simple words, smaller banks can’t stand the heat of growing bad loans and eventually they collapse. However, if they are merged with the bigger banks, they can reduce the risk of failing without losing the business. On the other hand, bigger banks can capitalize on new customer base and deposits to expand their market.

From the past few years, Public Sector Banks are also facing the challenge of receiving lower deposits. It is quite evident that customers don't trust banks these days to deposit the money. Either they invest or buy some other valuables. However, surviving with lower deposits can be a difficult task for any bank as they can’t rely on RBI fully to manage their credit operations. As a result, the bank’s lending capacity reduces to a greater extent which also lowers the lending capacity of the NBFC as public sector banks also lend to the NBFC. In simple words, lower bank deposits cause too much chaos for both banks and the NBFCs. However, bigger banks are not prone to this but smaller banks can’t survive it too long. So, if a two or more PSBs mix into one, the lending capacity increases and readily available credit boosts the GDP.

As you have witnessed in recent years, the banks have lost their credibility by lending big corporate loans to some of the big business owners which resulted in bad loans. However, no one can blame the entire bank because there were technical gaps that were used by some clever bank officers. For instance, as in the case of Nirav Modi and PNB, only three bank officers knew about the loan sanction.   However, if the bank would have connected the SWIFT code to the CORE (Centralized Online Real-Time Exchange), the chances of fraud could have been halted. Now, all the banks will connect SWIFT with the CORE, and it will instil transparency in the loan disbursal process especially in the international loan.

Under Effect on The Common Customer

The consolidation will allow Public Sector Banks to work freely as their lending capacity will increase and they will be able to contribute to the goal of a sound economy. This will also ensure customer satisfaction and transparency in the banking system.