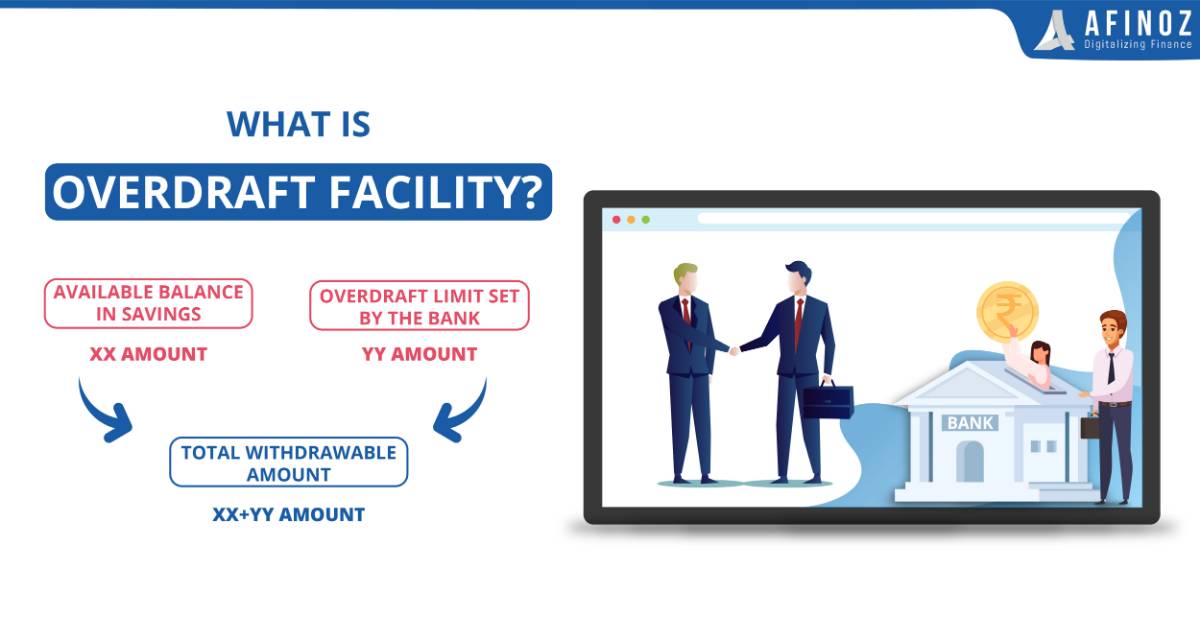 Everything You Need to Know about Overdraft Facility

An account from which one can withdraw an amount even if the balance in the account is nil is known as Overdraft account. A specific limit is sanctioned by the bank where one can go negative up to that limit. It is a kind of loan where the borrower is required to pay interest only for the amount withdrawn. It is extended to individuals by the lenders having savings or current accounts. It is a loan where one pays the interest as EMI.

Approved Credit Limit – An individual is awarded overdraft facility over a predetermined limit. It is different for each borrower.

Interest Rate - Unlike other forms of financing where the borrower starts paying on the principal irrespective of usage, overdraft facility calculates interest only on the amount that you withdraw. It is calculated on a daily basis that is billed at month-end. If one defaults in payment as per set schedule, the interest is added to the principal amount at month-end and then interest will be calculated on new principal.

No Prepayment Charges – The prepayment charges are not levied by the lender on Overdraft facility.

No EMIs – Unlike other loans, the repayment is not done through EMIs. The borrower repays the amount whenever he has. A borrower can repay the amount as and when he can.

Minimum Monthly Payment – There is no minimum monthly repayment in overdraft but the amount which the borrower owes should be repaid.

How to get an overdraft facility?

An applicant can download the form online or can apply by visiting the concerned branch of the bank. Many banks also charge a one-time processing fee that varies from bank to bank. One can also apply for the facility while opening the account with the bank.

Overdraft facility can be granted to a borrower on a secured and unsecured basis. For secured overdrafts, the lender possesses the right to sell off the assets to recover the amount. If the collateral doesn’t cover the cost of the withdrawn amount in the overdraft, the applicant is liable to pay the difference.

Let us discuss about the various types of Overdrafts below:

Lenders also offers overdraft against salary. Applicant can get an overdraft limit up to 2-3 times of the salary but it varies from lender to lender. Such a facility is also known as short-term loan facility.

The value of equity is fluctuating based on market rates, hence overdraft against equity is not a preferred option. Because of the market fluctuations of equity, the percentage sanctioned for overdraft is less.

Following are the required documents for applying for an Overdraft facility

How does an overdraft facility work?

An applicant receives the requested overdraft amount similar to a requested loan amount. For pre-approved overdraft facility, an applicant can withdraw funds whenever he needs from bank and it goes into overdraft. The interest charged will be levied by the bank from the time you borrowed till you repaid.

An applicant can repay the money to the lender fully, partially whenever they want. One can again withdraw money from the account as the need arises until the limit of overdraft is reached.

For the overdraft facility through the bank account, the bank doesn’t have collateral against it. For borrowers taking an overdraft against their assets as collateral is a secured collateral. Also, for those collaterals, the bank charges interest rate accordingly.

Individuals having a salary account with the bank can avail the overdraft facility. By this facility account holders can withdraw cheques for an amount in excess maintained by their salary account.

Is the overdraft facility good?

An individual’s financial needs is the deciding factor for availing funds but overdraft is a better option. It has flexible borrowing and repayment options, giving one the freedom to decide how much money will be repaid each month. It is also a cheaper short term borrowing option, which may be accessible without being charged on the interest amount.

What is the difference between overdraft and loan?

An overdrafts amount varies depending on the customer’s requirement, whereas a loan amount is fixed borrowing.

The rate of interest charged on overdraft is only on the borrowed amount and not on the whole stated amount.

An overdraft allows flexible repayment options as compared to loans.

Can you withdraw cash from overdraft?

Yes, cash can be withdrawn from overdraft as and when required and the interest has to be paid only on the amount borrowed.

What if I can’t pay my overdraft?

If one defaults in payment as per set schedule, the interest is added to the principal amount at month-end and then interest will be calculated on a new principal.

Is there a limit on overdraft fees?

The bank may charge 3-4 times per day as fees for an overdraft. However, it depends on bank to bank.

Who can apply for an overdraft facility?