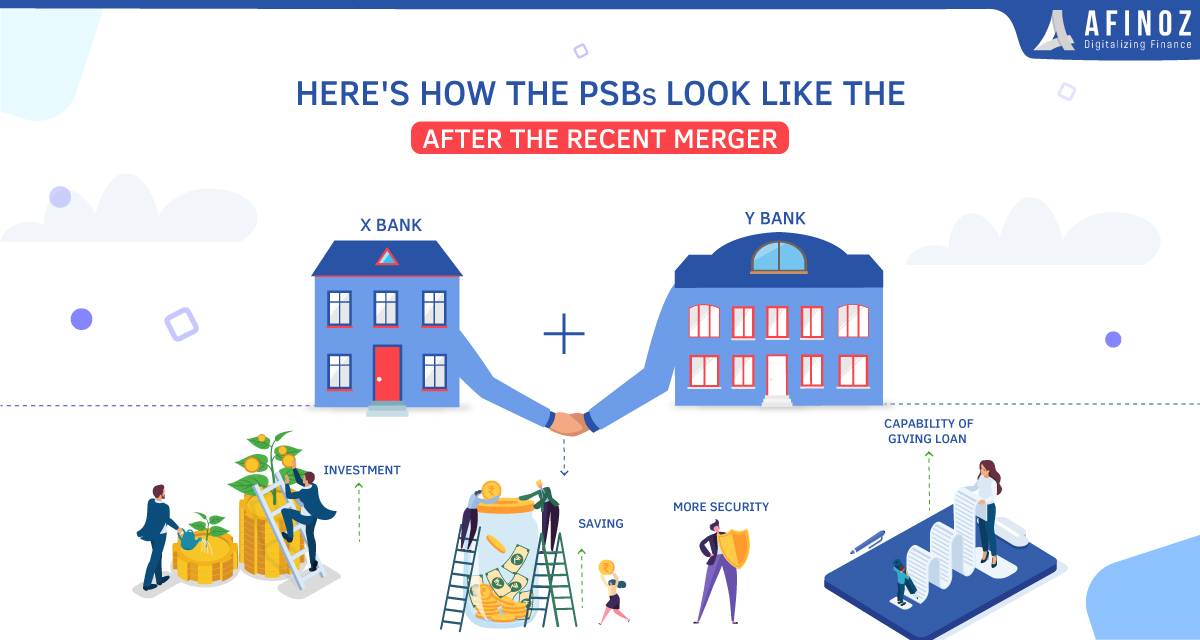 Here's How the PSBs Look Like After the Merger

The lockdown period due to COVID 19 outbreak has witnessed the biggest ever consolidation exercise in the banking space in India.

Reserve Bank of India has said, “ The merger of 10 state-run banks into four will come into force from April 1”.

In the merger, there is an anchor bank and amalgamation banks, where the latter gets merged with the former. The mergers are aimed at creating global sized banks in India.

Here’s a look at it:

As stated by the Government- “ This move of the merger will lead to the creation of stronger establishments that will be able to meet the challenge of a $5 trillion economy”.

Here are a few key points about the mega-merger:

The merger of Bank of Baroda with Vijaya Bank and Dena Bank last year was extremely successful, according to the Government. And the Government is expecting similar results with this amalgamation of the 10 PSBs. Bank of Baroda has posted strong financial results of before and after the merger, with operating profit up by 11.4% (Rs 1,487 crores), deposits increasing by 8.8%, capital ratio increasing by 171 basis points, and retail lending by 15.3%.

This consolidation would lead to cost benefits with greater scale and synergy. This should enable PSBs to enhance their competitiveness and positively impact the Indian Banking System. The ability to support larger ticket size lending and have competitive operations by virtue of greater financial capacity, is what consolidation would provide. Additionally, PSBs would be in a position to gain a competitive advantage by leveraging analytics in a rapidly digitalising banking landscape. This will be possible by the adoption of technologies across the amalgamating bank, access to a wider talent pool, and a larger database.

So, let’s figure out how as a customer of one or more of the banks being merged, can have a few significant implications:

Customers get a new account number and customer ID. Make sure to update your credentials of email address/physical address and mobile number with your bank to get notifications. Customers having two accounts will be allotted a single customer ID, where the merger will take place.

Post allocation of new account numbers of IFSC codes, you will have to update these details with various third party entities. Those will include the income tax department for tax refunds, mutual funds to get the redemption amounts and the National Pension System (NPS) etc.

Customer may get access to a wider network of ATMs and larger bank branch network. Keep a check on the new IFSC and MICR code applicable to your branch which will be required to quote it for funds transfer and other financial transactions. Customer will now also be able to choose from a broader suite of products and services.

Deposit, lending rates to be decided by the merged entity

Post-merger of banks the loan rates may change as there may be a change in the composition of deposits and cost of funds. For example, Oriental Bank of Commerce and United Bank of India have been merged into Punjab National Bank (PNB). So, if PNB has a lower interest rate on loans, one can expect a decrease in spread for existing customers of UBI and OBC.

It is not clear now for those who have loans running with the amalgamating banks as the MCLR rates are different for different banks.

To ensure no disruption in services the existing cards are likely to remain valid for the interim period. Later these may be exchanged for those of the merged entity at some stage. Customers will not be charged any fee for using their debit cards with their amalgamated banks.

Due to the merger in place paperwork will increase.

For fixed deposits and recurring deposits, the current rate of interest will continue till maturity. The renewal of FDs will be done with the latest term deposit rates of the amalgamated bank.

With the mergers happening, the technology has to be at the forefront to keep all transactions continuing seamlessly. Few issues have been notified about the problems arising out of tech-related systematic changes. The finance minister has promised to attend to those problems.

In the midst of the fight against the global Covid-19 crisis, going ahead with the merger of 10 public sector banks (PSBs) into four large entities is profound and will bring out significant changes in the future.